Get your copy today! 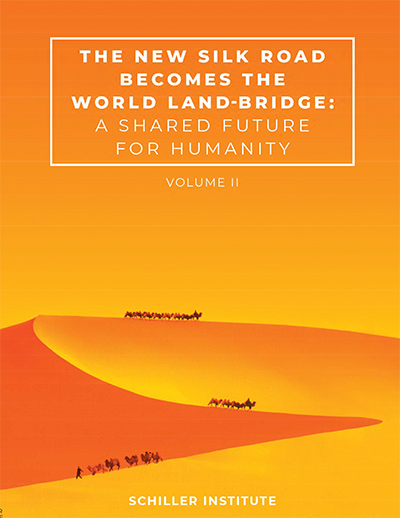 A Shared Future for Humanity

The LaRouche movement has played a unique role in developing proposals for international economic development and in setting into motion trends of policy making that are now increasingly prevalent in the world. In 1997, with the end of the Cold War and the potential for international cooperation around the common aims of mankind, Lyndon and Helga LaRouche proposed the “Eurasian Land-Bridge” as a “New Silk Road … for Worldwide Economic Development.” After the 2013 announcement by Chinese President Xi Jinping of the Belt and Road Initiative (a proposal in resonance with the LaRouche proposal), the LaRouche movement published the first volume of “The New Silk Road Becomes the World Land-Bridge,” a 374-page report that integrates major development projects from around the world, under the framework of the economic approach founded by Lyndon LaRouche.

We are happy to announce the publication of this second volume, “The New Silk Road Becomes the World Land-Bridge: A Shared Future for Humanity,” in which we bring you an updated picture of the progress of China’s Belt and Road Initiative, including detailed region-by-region analysis and newly updated maps. We also highlight the principles of physical economy and economic metrics discovered by Lyndon LaRouche, upon which the possibility of uplifting the standard of living of humanity depends. We examine the strategic relation of the Western nations to the emerging new paradigm, and what challenges must be overcome in order to overcome the old-paradigm approach of British geopolitics and replace it with LaRouche’s top-down program for overcoming economic collapse in the West.

As Schiller Institute founder and chairwoman Helga Zepp-LaRouche has said, “I think that the New Silk Road is a typical example of an idea whose time had come; and once an idea is in that way becoming a material reality, it becomes a physical force in the universe.”

Take advantage of this powerful tool for policy-making and political organizing!