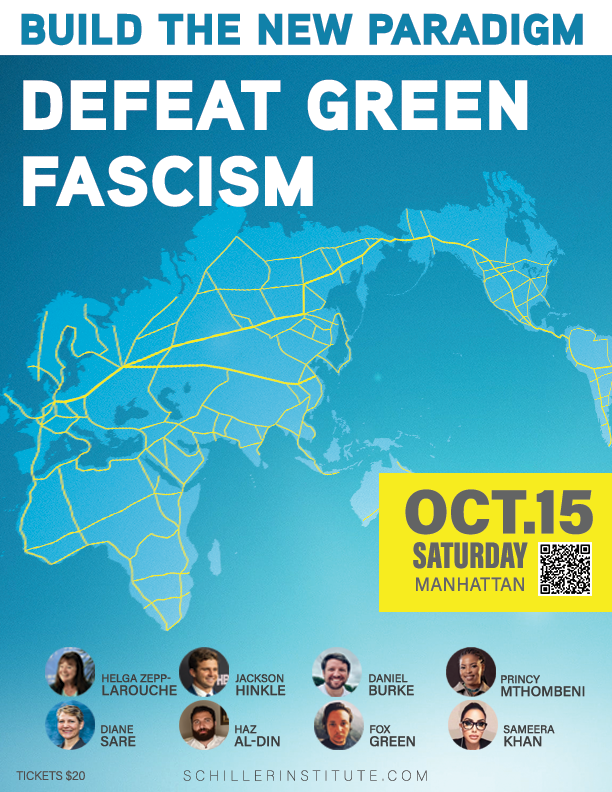 IN-PERSON TICKETS are $20 per person and can be purchased using the form at the bottom of the page.

Register for the free livestream here.


The end of the genocidal neoliberal system has come, accompanied by catastrophic hyperinflation and the white-hot danger of thermonuclear war.

In response, the members of the BRICS Plus, the Shanghai Cooperation Organization, the Eurasian Economic Union, and associated nations worldwide are moving toward a new, just international economic order, one capable of expanding China’s Belt and Road Initiative into a global mission to eradicate hunger and poverty. Realizing this potential demands international cooperation to halt the US-NATO march toward Armageddon war and put an orderly end to the City of London and Wall Street’s global speculative bubble. It demands mankind finally bury the rotten doctrine of Thomas Malthus, still today the leading apologia for colonialism. It demands new, principled leadership—an international youth movement for peace through economic development.

Argentina’s annual inflation rate in August was 71%, Haiti’s 25%; Goldman Sachs has predicted 23% for the UK by early 2023. Seventy-one million people worldwide fell into extreme poverty in the period of April through June of 2022.  The World Bank has reported that up to 80 nations require immediate debt relief, or they will soon find themselves incapable of importing the food and fuel needed for their populations to survive.

An average of 25,000 people are dying unnecessarily of hunger each day, and already in 2021, 2.3 billion people were living in moderate or extreme food insecurity. 45 million children under the age of five suffer from “wasting,” the most extreme form of malnutrition, which increases a child’s risk of death by twelve times. Death of hunger is described as the most torturous way of dying, because your body essentially feeds on itself before finally giving up. That such injustice exists is proof of the continuation of colonialism in new cloth, because it would be so easy to produce enough food for all human beings living on this planet.

What is the cause? Look to the decisions made at the September 2019 meeting of the Federal Reserve,  with other Western central banks and financial behemoths like BlackRock in attendance. There, former head of the Bank of England, Mark Carney, announced measures to enforce global obedience to the elimination of fossil fuels (“Net Zero”) and the creation of high inflation through the printing of money directed toward keeping the more than $1 quadrillion global debt bubble afloat. In 2020-21 alone, at least $14 trillion was created by the Federal Reserve, U.S. Treasury, and European Central Bank, with effectively none of it going to the improvement of the physical economy. Trillions have flowed into a new Green finance bubble and its unreliable, low energy-density solar and wind projects. Meanwhile, reliable energy supplies are sanctioned and the food supply is destroyed by the imposition of Malthusian limits on land, fertilizer, pesticides, and energy.

In 1971, the late American economist and statesman Lyndon H. LaRouche, Jr. uniquely identified Nixon’s action to “pull the plug” on the Bretton Woods international monetary system as the turning point toward a modern Malthusian policy orientation that would lead inexorably to famine, pandemics, fascism, and war, should it be allowed to continue. The catastrophe we are living through today is the consequence of that policy orientation–a paradigm built on the evil belief of the Anglo-American oligarchy, as expressed by representatives like Lord Bertrand Russell, that mankind is a cancer on the planet, a beast whose population need be culled, starting with the “non-white” peoples of the world.

To defeat this menace to civilization, the modern-day British Empire, LaRouche built an international movement devoted to the total physical economic development of the formerly colonized areas of the world, and of every nation. Today, that vision is known internationally as the World Land-Bridge, a global network of development corridors connecting all nations with water, power, transportation, and agroindustrial systems. LaRouche insisted that mankind is not an animal—that we are the only creative species known in the universe. Each human child has within it the potential to become a genius, to make discoveries of universal principle that contribute something necessary in science or culture to the species as a whole. By the development of creative genius, we increase the potential relative population density of mankind–the ability of mankind to do good.

To emerge from the present, all-encompassing strategic crisis with a new, just world economic order demands new genius. The genius to conceive of the necessary development of humanity itself—from a juvenile period of geopolitics and war, to a mature devotion to the common scientific, moral aims of mankind. This genius was on display at the SCO’s recent meeting in Samarkand, Uzbekistan, where nations representing over half of the world’s population gathered in devotion to the principles of international law and the UN Charter. The West, meanwhile, is dominated by cynicism and barbarity. But we know these are the artificial effects of top-down cultural warfare, and we reject them. We demand that the goodness within our societies be brought forward, and we demand that the clouds of fear be dispelled. In organizing this October 15, 2022 international Schiller Institute conference, we reach out to young people across the world and invite them to collaborate with us in this solemn mission to end colonialism in all its forms and eradicate poverty and hunger from this world.