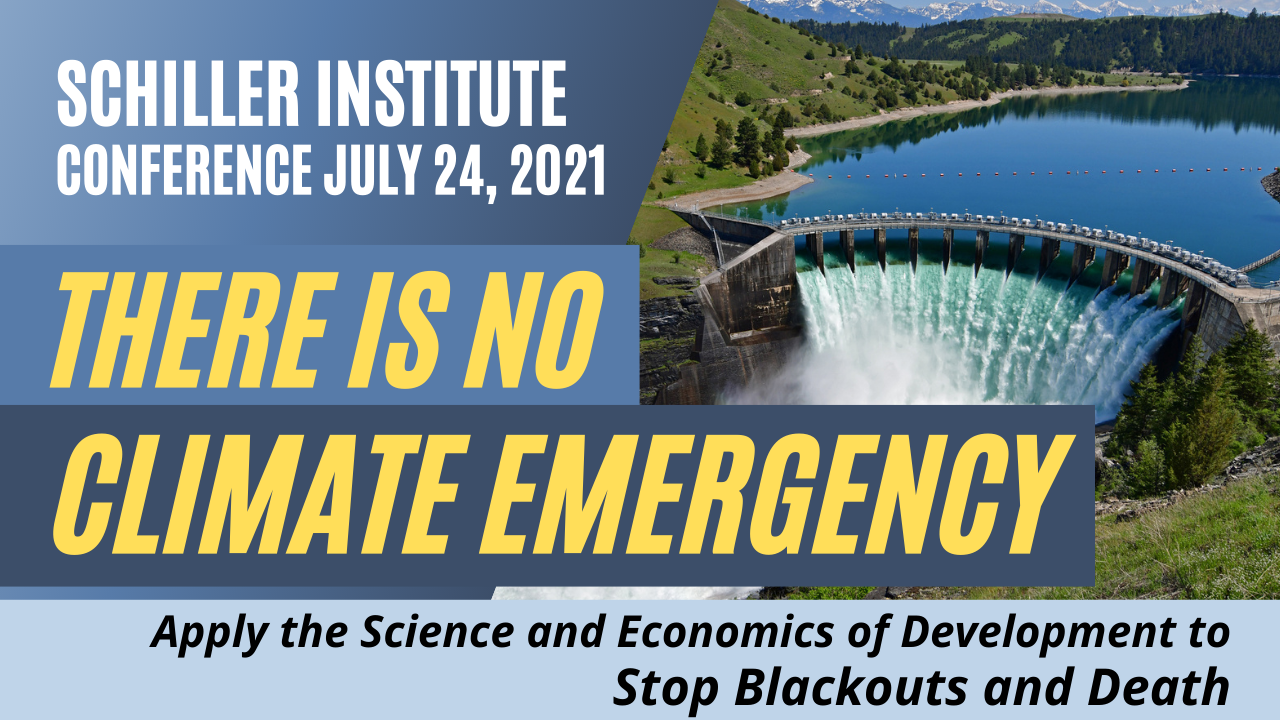 The Schiller Institute will hold an international (virtual) conference Saturday, July 24, with two sessions (9 am, and 2 pm EDT), under the title: “There Is No ‘Climate Emergency’—Apply the Science and Economics of Development to Stop Blackouts and Death.”

The shift out of high-density electricity generation—coal and nuclear, into low-energy dense, unreliable wind and solar, has reached the stage in the trans-Atlantic of pending blackouts in the United States and Europe. The North American Electric Reliability Corporation (the overview agency for electricity reliability in the U.S. and neighboring Mexico and Canada) has issued a map, showing where “Electric supply shortages may occur in the western United States, Texas, New England, and parts of the Midwest,” from now through September.

At the same time, elsewhere in the world—apart from the critical example of China—the lack of basic infrastructure for power, water, and health care capacity, has reached the condition of guaranteeing persistent global disease and famine.

This deadly situation must be reversed, beginning with the commitment for adequate water, power, and public health provision, along with emergency measures against the COVID-19 pandemic, including launching work on modern health care capacity in every nation.
In the forefront for these initiatives are Afghanistan, and Central and Southwest Asia, where decades of “endless war” policies have caused mass devastation, while the policy of sanctions prohibits reconstruction.

It is urgent to get to work on what must be done for infrastructure-building in all respects. In terms of mutual security worldwide, this means a return to the “West Point” military tradition of engineering, not military-industrial warmongering. This is in the common interest of all nations, and is best served by collaboration among major powers, as was implied in the June 16 first-step meeting between Presidents Biden and Putin.

Most urgent of all, is to end any respect for the assertion there is a “climate emergency” which demands drastic reductions in human activity—agriculture, industry, power, water, to restrict greenhouse gas emissions. This is a lethal falsehood. The concept of ever-greater energy flux density—as put forward by statesman-economist Lyndon LaRouche, is essential for human progress.

The conference aims to bring together experts and laymen from many nations, who want to act now. The roster of speakers and discussants, the program and invitation/RSVP is forthcoming. Plan to attend and spread the word.

Jason Ross (US): Science Liaison, Schiller Institute
Topic: “There Is a Limit to Renewable Energy”

Prof. Franco Battaglia (Italy): Professor of Physical Chemistry, University of Modena; Member of the Initiating Committee of the Petition on Anthropogenic Global Warming of June 2019
Topic: “The IPCC Is Wrong; the Consequences Are Deadly”