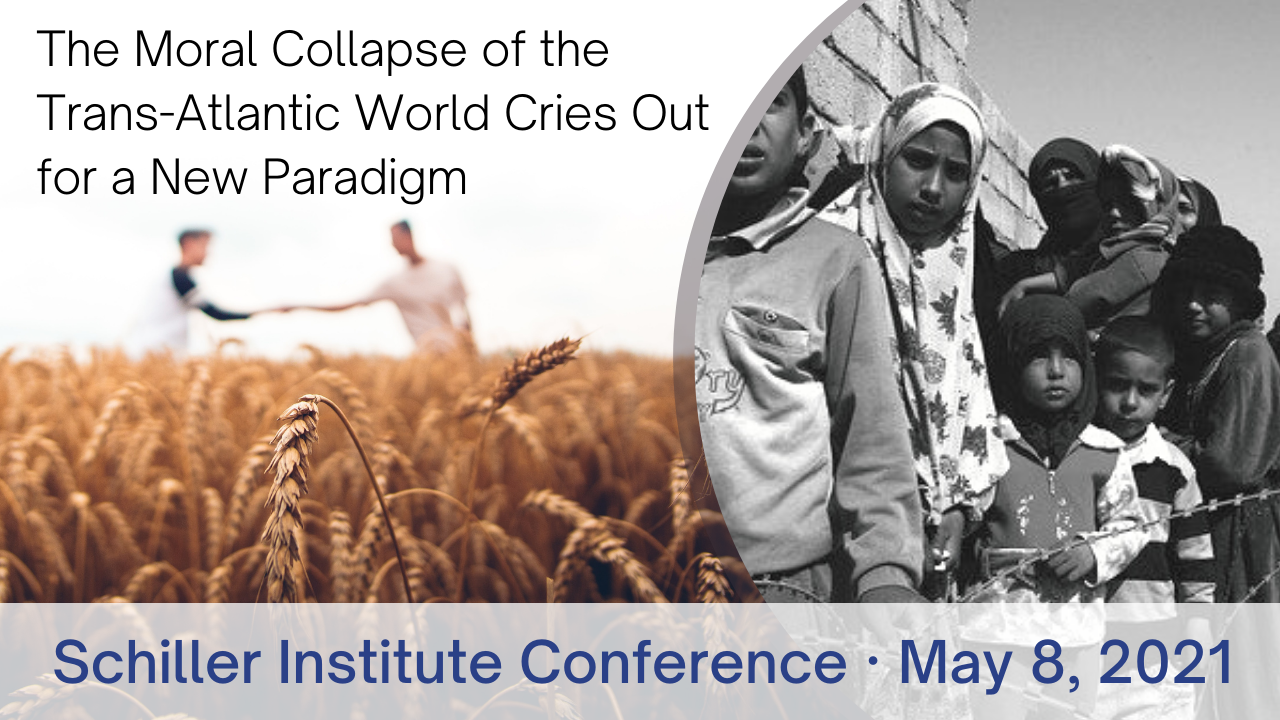 And although a man believes he truly knows, he nevertheless easily experiences, that that which he believes he knows, can be known more truly.
—Cardinal Nicholas of Cusa, organizer of the Council of Florence, 1439

Schiller Institute President Helga Zepp-LaRouche, in a webcast on April 28, underscored the extreme urgency of the forthcoming May 8 Conference:

"I think it is actually horrifying how few people are aware of the acute danger in which civilization finds itself. There are only a few voices that are warning of nuclear war. One of them, Tulsi Gabbard (former Congresswoman, combat veteran, and Presidential candidate), about two weeks ago, in a show with Tucker Carlson, pointed to the fact that if there would be an outbreak of war, it would turn nuclear, it would reach the territory of the United States,...and nobody would remain alive.”

Rising tensions between Russia and the United States, and China and the United States, all thermonuclear powers, can provoke “the unthinkable.” The folly of playing “superpower nuclear chicken” as discussed in US military doctrines like “Prompt Global Strike,” is comparable to lighting a match in an apartment building filled with gas. The first moments of such a conflict, will also be the last moments of the conflict.

"A similar warning comes from a U.S. Naval War College analyst, Lyle Goldstein, who said that a nuclear war with China could end life on Earth.

And there’s also an investigative journalist, Caitlin Johnstone, who has just posted several articles saying that the danger of nuclear war is completely underestimated. I can only say, when you study the whole strategic picture, how these different scenarios are unfolding, it is high time to wake up!”

"We will have two panels: One will be on the strategic situation, where we have already lined up extremely top level speakers from many countries, from across the Atlantic and also Asia. The second panel will be on the work of the Committee for the Coincidence of Opposites. This is our effort to put together an anti-Malthusian movement of people who are fighting to get a modern health system in every single country on the planet, something we have been saying from the beginning of the pandemic.

"So what we will discuss, among other things, is what to do to stop the pandemic, by creating a world health system, to stop the world famine, which is big, especially in countries like Syria, Yemen, but also Haiti, and many other countries hit by sanctions. So we demand that all sanctions be lifted. Sanctions are a brutal form of warfare against the poorest! The children, the old people, those who can’t really help themselves. This is a call for action to change the whole situation around, and get more people to understand that we need to change the policy, because we are heading toward a disaster. And people have to get it, and then they have to move, and move fast, with us."


The March of Folly: Can Mankind Still Extinguish the Now-Lit Fuse of Thermonuclear War?

3. Col. Richard H. Black (US), former State Senator (Virginia), former head of the US Army’s Criminal Law Division, US Pentagon: “The Immorality of Sanctions: The Case of Syria”

6. Minister-Counsellor Sayed Mujtaba Ahmadi, Deputy Chief of Mission, Embassy of Afghanistan, Canada: “A Perspective for the Economic Development of Afghanistan in the Setting of the New Silk Road”

9. Caleb Maupin (US), Journalist and Political Analyst; Founder, Center for Political Innovation: “Sanctions Against Syria, Conflict with China: Who Benefits?”


The Method of the Coincidence of Opposites: Only A United Worldwide Health Effort, Without Sanctions, Can Reverse A Worldwide Pandemic

2. Dr. Joycelyn Elders, former Surgeon General of the United States: "Join or Die: Why A World Health Platform Protects Each of Us”

6. Augustinus Berkhout (Netherlands), Emeritus Professor of Geophysics, Delft University of Technology, Member of the Royal Netherlands Academy of Arts and Sciences: ”Greetings to the Schiller Conference”

10. Antonio Sanchez (Venezuela/Chile), Int’l. LaRouche Youth Movement: “They Knew or Should Have Known: the Cases of Venezuela and Chile”